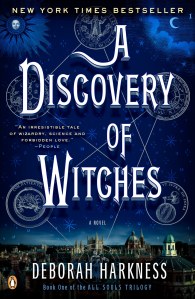 Genre: science fantasy (my own designation to differentiate from science fiction and high fantasy)

Summary: Diana Bishop may be the descendant of powerful witches, but she wants nothing to do with magic. Too bad, says Fate. Diana accidentally recalls a mysterious book that was thought lost for hundreds of years. Other creatures (witches, demons, and vampires) have longed to get their mits on this book because it supposedly reveals why they exist,  how they were first made, and maybe why they are going extinct. Pretty soon everyone is after Diana, including Matthew Clairmont, a hunky vampire that easily turns Edward Cullen from stud to dud!

The romance is steamy, flirtatious, and fun. The plot line also lines up some good surprises, red herrings, and curve balls. But Harkness has some bad habits that you’ll want to know about.

For one, she loves to describe what everyone — and I mean e.v.e.r.y.o.n.e — wears. Any time a new character arrives on the scene, rest assured: you’ll get the whole red carpet rundown. Even when the tension is at its tightest and the bad guys are closing in big time? Yes, even then, Harkness will pull the reins on the story to stop and tell you not only that an evil witch is wearing a dress, but what kind of silk it’s made from and what kind of neckline it’s sporting!

Don’t get me wrong: clothing can be an important indicator of character. It can reveal vital secrets and insights. But that is NOT what it is doing here.

Additionally, Diana borders on the brink of being an inactive, passive, and boring female protagonist. Quite often, Lil’miss Damsel needs to be saved. She spends a great deal of time lying down, crying, being carried about by Matthew. And even when she takes charge, Harkness undermines it by putting Matthew in charge of the strategy.

I chose to make allowances for these shortcomings because so many other aspects of the book are good and good enough. Whether or not you’ll do the same is up to you.