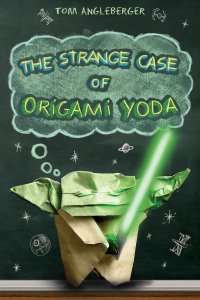 Summary: Dwight, a loser, talks to his classmates via an origami Yoda finger puppet. If that weren’t strange enough, the puppet is uncannily wise and prescient. Origami Yoda predicts the date of a pop quiz, guesses who stole the classroom Shakespeare bust, and saves a classmate from popularity-crushing embarrassment with some well-timed advice. Tommy wants to believe Yoda’s powers are real because he wants to ask the biggest most important question of all: Does Sara like him (and, thus, should he ask her to the dance)? But there are lots of reasons to be skeptical.

This is the first in a really fun series. Star Wars fans and crafty kids will enjoy many of the newly released supplemental books packed with lessons in origami and journal doodling.

Critique: The story is told like a Rashomon, pitting multiple points of view against each other. Lots of characters contribute their testimonies to Tommy’s casebook. Some submit text messages. Others record audio. Other’s just doodle (an effect that doesn’t come across in MP3 very well). The yae’s battle the nay’s until the reader is as unsure as Tommy. Angleberger excels at capturing the middle grade voice and attitude. The tone is light and fun. Everyone has a happy ending. Like Mark Haddon’s The Curious Incident of the Dog in the Night, Angleberger assigns to Dwight the classic symptoms of autism, however, he never names the condition outright. As a result, Angleberger misses a prime opportunity to discuss a developmental difference that impacts many kids and families in his target audience.