Recently, I had the distinct privilege of receiving a professional critique from a Ms. Fabulous Agent whose expertise and instincts make me salivate! So imagine my effervescence when she said I had a distinct, strong, and interesting Voice! “There is a noticeable personality…a ‘feel’ to this narrator that’s unique and engaging and interesting. …A truly unique narrative voice is always the best thing in the world to shop.”

This critique came like a surprise bouquet of flowers. I have Voice — that most ethereal and ephemeral of craft tools. The one that thousands of craft books, writing instructors, editors, agents, and other authors will tell you to acquire if you want to make it in the industry. Even the Fabulous Agent went on to say that too often she rejects pieces that lack Voice because they feel “flat,” “generic” or “derivative.”

But Voice is a tricky element to teach. Craft books, writing instructors, editors, agents, other authors tend to pinch their ears between their shoulders when asked to provide step-by-step instructions to develop Voice.

The students in my writing classes implore me: how do we create a unique Voice?

To answer them, I pinch my ears between my shoulders.

Then I try to write something really supportive in the margins: Say this in your own, distinct way — like no one else in the world?

But I know that’s not good enough — especially if I have A Voice. So, I have rolled up my maps, slung binoculars around my neck, loaded my ruck sack with cans of beans and other provisions, and put on my outback fedora. I have laced up my hiking boots and gone off in search of a better answer.

What follows is neither Kali’s Cup nor the Holy Grail. To wit, it is not a procedural doctrine outlining how authors can craft a unique Voice. It is, however, the beginnings of a close study on Voice and some of its facets. (Warning: things might get a little mathy and I blame the upcoming musical metaphor…)

A Series of Sounds, Rambling Repetitions, and Synchronized Syntax

Lemony Snicket’s Unfortunate Events series is a delight to read quietly or aloud. In fact, these books harbor a definitive, recognizable sound. In short, they have A Voice. From a critical stance, Voice seems to be the product of several craft elements harmoniously combining and interacting. Think of an orchestra, where many instruments come together to play one song. Each instrument contributes a different texture. Each one is responsible for different musical elements. Some carry the rhythm. Others, the melody. At least three different instruments contributing to Snicket’s Voice include sound, repetition, and syntax.

Sound
Sound is perhaps the simplest instrument or element to identify and incorporate. In her book Steering the Craft, fantasy writer Ursula K. Le Guin argues that all writers train and develop an ‘ear’ for their books and how they sound. The sound of your writing matters to your readers. Most readers, especially young ones, “enjoy the sound of language for its own sake. They wallow in repetitions and luscious word sounds…” (Le Guin 19). Sound can come from literary devices like alliteration, assonance, and onomatopoeia. Throughout the Unfortunate Event series, the youngest of the Baudelaire orphans, Sunny, is a toddler who speaks more in sounds than actual words. Sunny’s language, or rather her baby-shrieks, is an infinite vault of onomatopoeia. She exclaims things like Gack! Jook! Yeeka! Hux! Gibbo! Poko! and so on. While her sounds are sometimes comically translated by the author speculating about what the sound must have meant, they are first and foremost a delightful use of sound.

The place names in all of the books in the series demonstrate another way in which Snicket employs sound, this time in alliteration that contributes to an overall rhythm. The Austere Academy, The Grim Grotto, The Miserable Mill, The Hostile Hospital; these are just a sample of the alliterative titles stringing the series from one unfortunate event to another. Beyond the titles, Snicket also employs a similar alliterative place-name schema for places the orphans visit in the stories. For example, they sail out on Lachrymose Lake, or take a train through Finite Forest, or go out to play on Briny Beach. Le Guin points out that place names should be given special consideration by the writer because the “echo allusions hidden in them are intensely evocative” (25). The titles of each book in the series and the place names in the stories indicate not only where adventures take place, but also allude to the undoubtedly unhappy circumstances the orphans might encounter in each location. 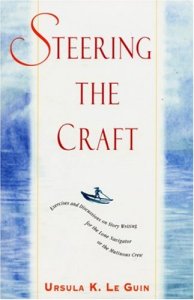 The alliteration in Snicket’s place names also leads to the next instrument or element contributing to the story’s symphony: repetition. Le Guin points out that “stories written to be read aloud…use a lot of repetition” (55). The place names repeat simple sounds through the replication of the letters like A-A, B-B, Gr-Gr, and Mi-Mi. However, an author need not stop at the simple repetition of a single sound. There can be the repetition of “words, of phrases, of images; repetition of things said; near-repetition of events; echoes, reflections, variations…all narrators use these devices and skillful use of them is a very great part of the power of prose” (Le Guin 54). Snicket echoes entire phrases in his initial descriptions of characters. To introduce Klaus, Snicket says, “He knew how to tell an alligator from a crocodile. He knew who killed Julius Caesar. And he knew much about the tiny, slimy animals found at Briny Beach” (4). The phrase “He knew” repeats again and again, lending weight to Klaus’s intelligence while simultaneously contributing to the overall rhythm.

In another example, at the beginning of the first book, Snicket plays with repetition by replicating the words “book” and “happy” while echoing the “b” and “hap” sounds. For example, he says:

“If you are interested in stories with happy endings, you would be better off reading some other book. In this book, not only is there no happy ending, there is no happy beginning and very few happy things in the middle.” (1, my italics)

Happy appears four times in the span of two sentences and Snicket echoes the sound by inserting the word happened into the following sentences. Additionally, “book” appears twice (in close approximation) and the “b” sound arises five times in total. A case could also be made for the linguistic relationship of the letters ‘b’ and ‘p’ and the similar way in which the mouth forms the “buh” and “puh” sounds. Whether the reader vocalizes these sounds, the evidence would indicate that Snicket’s authorial ear picked up on the relationship and thus lyrically replicated it.

Snicket duplicates this device to close the novel, where he repeats and echoes a series of gloomy “un” and droning “n” sounds. The orphans are driven away from all happiness to “an unknown fate with some unknown relative. They didn’t understand it, but like so many unfortunate events in life, just because you don’t understand it doesn’t mean it isn’t so” (161-162, my italics and bold). The repeating unknown, understand, and unfortunate stand out on the page when in boldface. The sound of the “un” prefix at the beginning of those words (italicized for emphasis) along with the all the other somber droning ‘n’ sounds (also in italics) toll almost like a dreary bell. And just like the beginning of the book, the repetitions evoke Snicket’s storytelling Voice.

Syntax
Expanding from smaller elements—sounds—to more conglomerate elements—repeating words and entire phrases—we arrive at the larger end of the scale: sentences. While sentences should not vary in their most basic contents—subject, object, and verb—they can vary wildly in their structure and length, or what is also known as syntax. According to Le Guin, “Sentence length has a lot to do with the rhythm of prose” (40). To get an understanding of Snicket’s undeniably lyrical, read-aloud rhythm, I decided to plot the sentence length of what I identified as three important chapters in the first book of the series. To do this I simply counted the number of words in each sentence.

I limited my examination to the opening paragraphs of the selected chapters. I did this because, in terms of establishing rhythm, paragraphs “are architecturally essential, part of the structure and the long rhythmic pattern of the work” (Le Guin 50). And openings are where the author must immediately establish Voice.

Now, this is where things are gonna get a little mathy, and if you’re like me, math is to good times what radiation leaks are to Sunday barbecues. But I digress. To tempt you onward, here’s a delightful image (that doesn’t AT ALL represent how math makes me feel):

Whereas the second chapter tends sustain and support what was established at the start, the third chapter of most books is where adventures kick off and variation can arise. By the third chapter of The Bad Beginning, the Baudelaire orphans have been left with Count Olaf and it is from this point on that conflicts push the story forward to the ultimate climax: whether they live or die. The first paragraph of chapter three contained sentences of these lengths: 15, 32, 27, 39, 25, 19, 29, 26, 46, 38, 25.

The next chapter bearing a significant and pivotal role in the formation of the whole story is the one with the greatest conflict (chapter twelve in this case). This chapter depicts the all-is-lost moment. Violet is to marry the Count, Klaus has exhausted every possible ploy to save her, and poor Sunny is sure to be killed. The orphans are irrevocably doomed. Sentence word counts for this chapter were: 36, 10, 38, 25, 19, 19, 26, 15, 46, 28.

The first thing to notice is the consistency between the opening paragraphs themselves. Chapters one and twelve both open with 10 sentences; chapter three starts with 11! Other than the chapters that begin with dialogue, the opening paragraphs of the other chapters in the first book share this relative consistency in composition, averaging close to ten sentences at the start.

Besides that, the graph reveals how Snicket’s sentence lengths remain roughly consistent from one chapter to the next. The word counts are not identical line by line, but there are surprising correlations between chapters one and three. Chapter three also underscores the fact that this is where adventure kicks off. So much more is going on, thus it takes more words per sentence.

Chapter twelve starts off with an inverse pattern, but quickly synchronizes to the patterns seen in chapters one and three. All three chapters hit a relative peak in the 7th sentence, a drop-off on sentence 8, followed by one last surge on sentence 9. This graph demonstrates that Lemony Snicket’s Voice is not only recognizable, but also (visibly and audibly) resonant.

There is little likelihood that Lemony Snicket deliberately or methodically tallied his own sentence word counts in order to arrive at the consistency seen above. What is more likely is that he opened his writer’s ear and listened. He attuned himself to all the instruments contributing to and collaborating together in his orchestral arrangement of craft tools. Through plenty of revision, he plucked out anything that jarred with the harmonies. By following Snicket’s example, a developing writer can learn to play the individual craft instruments of sound, repetition, and syntax. Once the instruments are mastered, the writer who combines them into the symphonic Voice of story will stand out as a composer among musicians.