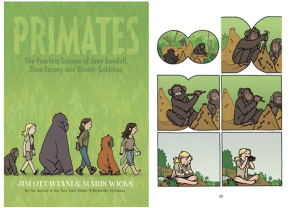 Summary: Combined narratives of Louis Leakey’s “trimate” women Jane, Dian, and Biruté. At a time when women were shooed away from the “men’s work” of science, all three women find unusual and unexpected support from eminent anthropologist, Leakey. As a result, all three get to live their dreams and indulge in their passion: studying and advocating for primates.

Critique: Each woman’s story is engrossing. The obstacles they face are staggering. That they took off alone into the wilds armed with journals and grit is sobering. Be warned though: at times, the font proves a little hard to read and there is quite a mixture of font styles to simulate handwriting or typewriter typing. Jane Goodall had hand-written scrawl for text bubbles, then cursive for her diary. Dian Fossey ‘s uses a rough all-caps, while Birute Galdikas’s accounts get a stylized typeface. More problematic than the font-frappuccino is the authors’ note explaining that certain aspects of these true stories had to be fictionalized in order to make the overall narrative arc work. I don’t personally agree with that tactic because it loads the reading experience with niggling doubts. For instance, it is so cool to think that poor Jane Goodall’s mother had to relocate with her daughter to Africa because it would otherwise be improper for a woman to go traipsing around unescorted or unsupervised. But maybe that was one of the made-up bits…? A reader won’t know until she gets a chance to look it up online, but that lures the attention away from reading the book in the first place. Ultimately, what should alone as spectacular work of nonfiction is shadowed with uncertainties.