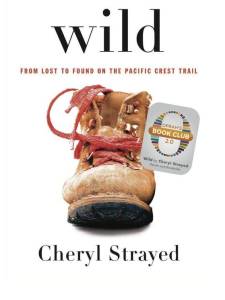 Genre: memoir (specifically, one of those young-woman-in-crisis-goes-a’-traveling memoirs)

Summary: This book is Eat, Pray, Love meets A Walk in the Woods.

Despite a mostly impoverished, sometimes rough childhood, Cheryl grew up generally loved by everyone but herself. Soon after her mother dies suddenly from aggressive cancer, Cheryl’s life falls apart. She grows estranged from her siblings and stepfather, she cheats repeatedly on her beloved husband, and she slides into a corrosive affair with drugs. A chance purchase in a hardware store leads her to the Pacific Crest Trail, which she decides to hike from summer to fall. Never mind she has zero experience hiking or backpacking. Never mind that her pack weighs more than several NFL linebackers. Never mind that her boots are too small. Never mind she has no knowledge of wilderness survival — hell, she can barely survive everyday life. Cheryl becomes obsessed with the trail and her conviction that it will lead her back to the pure soul she used to be.

Critique: Readers who enjoyed Elizabeth Gilbert’s riveting spiritual-emotional rise from a suicidal life-crisis into a Zen Master Cinderella will derive similar inspiration from Strayed’s memoir. And what Strayed lacks in Bill Bryson’s rib-tickling wit, she makes up for in devil-may-care hubris for the potential dangers of a hike that challenges even the most poised outdoorsmen. And unlike Gilbert or Bryson, the final third of Strayed’s memoir deserves oodles of praise simply because it holds true to its promise. That is, she sticks to the appointed finish line.

Readers will find Strayed’s writing at its best when delving into the grimiest, dirtiest, most loathsome moments of a life gone wrong. She accurately maps out the seemingly innocuous events that contribute to disastrous decisions, but her tender perspective is likely to invoke empathy from the most judgmental cynics.

Writers and writing students will find much to harvest from the cunning structure of the memoir, which follows the “lowercase e” format. Rather than start at some chronological beginning and work a linear path forward, Strayed opens her narrative roughly near the middle, when a minor freak accident — a prank played by the gods — causes her to lose her hiking boots in the middle of nowhere. Strayed ushers the reader a tad forward, giving the overall context of her situation (the fact that she has set out to hike hundreds of miles of high mountain terrain alone, as well as her desired destination) before wrapping backwards into the past, just like the little e.

Strayed is certainly not unique among memoir and travel writers when it comes to deploying the little e thanks, in large part, to all the how-to-nonfiction craft books pointing at John McPhee’s famous little e essay, “Travels in Georgia.” Where Strayed stands out is in her ability to construct the swelling arc of that little e. Like the ancient winds that carved out Moab’s stone bone bridges, Strayed crafts a breathtaking climax whose singular wonderment hinges not on the escalation, but on the inevitable collapse, the inescapable catastrophe.

By the time readers sense the narrative bending back around to the “all is lost” beat of the beginning, they are all but foaming for the descent into disaster. They’re hankering for calamity is practically manic. This is not to say readers are heartless and cruel — far from it. Readers clamor for the this down-dog roller coaster moment because the arc of the little e has provided sufficient evidence to suggest the hapless narrator might just survive the very worst of hiking nightmares. They cannot wait to see the worst bring out the best.

In short, the structure forms an architectural framework for hope.