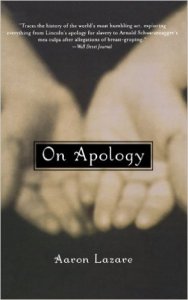 How successful are your apologies? Whether sincere or obligatory, do they genuinely repair the damaged relationship or do they only add arsenic to the community well? This book explores the elements of both appealing and appalling apologies.

Summary: Dr. Lazare, a former Harvard professor and leading expert on the psychology of shame and humiliation, deconstructs the elements of successful apologies while mapping the pitfalls of history’s more regrettable redresses.

Critique: I cannot count the number of times I was forced to apologize when I was young. The scenario usually ran thus: an argument or tussle broke out among the wild child tribe on the playground. Adults intervened and insisted we all make amends. So we did, eyes anchored to the ground, hands folded in our jagged elbow joints.

Of course those halfhearted atonements did little or nothing to sooth our wounds.

But even after I matured a little and could take (a little) responsibility for my mistakes, making a sincere apology either felt like those compulsory playground pardons, or else it did about as much good. But why? I said I was sorry AND I MEANT IT!

Lazare’s analysis of the act of apologizing starts off by parsing the vastly different psychological impact of saying and hearing “sorry” vs “apologize.” He then goes on to identify the four essential elements of a sincere, effective apology — which one that makes amends and heals the rift in the relationship.

To illustrate what happens when one or more of those elements is missing, Lazare points to high-profile public olive branches from figures like Abraham Lincoln (his second inaugural address), Janet Jackson (remember the nip-slip during the Super Bowl half time show?), Bill Clinton, former Senator Trent Lott (who gaffed when he voiced being proud of his votes for fellow politician and open racist, Strom Thurman), public officials or agencies apologizing (unsuccessfully) to historically oppressed minority groups, and so many more.

In light of our current circumstances, this may be a timely book to read. Our smartphones and excessive screen time already make us more socially inept, further limiting our capacity and ability to apologize when its needed. What’s more, the latest smash hit “reality TV show” — a topsy turvy political circus featuring a cast of Washington celebs suffering from colossal narcissism — promises to usher in a fresh array of catastrophic gaffes and scandals. Already we have heard a barrage of publicly televised apologies. Some we accepted. Others only lit the fuses on our Molotov cocktails. And with Lazare’s help, we won’t have to wonder if we’re getting a heartfelt mea culpa or an obvious pile of bovine byproduct.