Gearing up to see Al Gore’s return in An Inconvenient Sequel? Be sure to add some good mental trail mix to your rucksack.

Summary: Craig Childs travels around the world to showcase the impacts of climate change — those we can readily observe, as well as those more hidden in surprising chain reactions. Childs’ work won the Orion Award, presented only to those outstanding books which deepen a reader’s connection to the natural world. Childs is also the author of previous award-winning and thought-provoking books including The Animal Dialogues, Finders Keepers, and House of Rain.

Critique: With his usual devil-may-care penchant for bedlam, Childs takes readers — and anyone else crazy enough to tag along — to every deadly brink he can find on the planet which may (or may not) chart the course of our demise. He rafts an uncharted Himalayan river…with his stepdad…during flood season. He traverses the base of a glacier…while it is calving…at unprecedented speeds. He monitors the stormy, hostile waters around the Bering Straight…under gale-force winds hurtling stone-hard rain…with his mother.

From Greenland’s white water deserts to Mexico’s sandy no-man’s (and no-waters) lands; from Hawaiian lava flows to Iowan corn vistas, Childs presents a dazzling tour of destruction. Over and over, he covers the planet’s 4.6 billion years of cyclical renewl and collapse. Digestion and regurgitation of landmasses and species. He points out the research suggesting what we are going through now is perfectly normal…and yet perfectly exacerbated by our mode of modern life.

Sure, the earth will most likely survive any severe turnover — life always finds a way. But we homo sapiens might not be so lucky. We may have already triggered irreparable sequences; destructive dominoes already litter our path. Or do they? Only time will tell.

I’m not just being coy about the end of this book as a way of tempting you to read it. I am reflecting Child’s even greater penchant for sharing more tough questions than easy answers. Which is wise, considering how few complex issues are ever cut and dry. Not every debate has a right or wrong side. Sometimes both sides’ positions stink equally. In this case, Childs holds us accountable to answer the toughest questions. What will we do in the face of global demise — wait and see if we’re really boned, or act in every way possible to avert calamity?

We know what plays better at the movie theater when the clock on the nuclear bomb ticks down its final seconds before detonation. Rarely does the hero just sit and wait.

Because this is a critique and not a review, I am obligated to point out that this book’s greatest feature is also its most tragic flaw. It stems from a stylistic habit I share with Craig Childs, and thus, I comment with deepest respect and sympathy. Every page, every paragraph, is loaded with stunning similes and metaphors to evoke the settings. 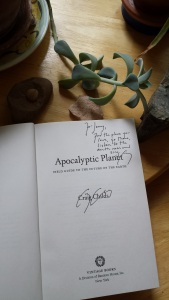 Back in February, I had the distinct pleasure and privilege of meeting Craig Childs several times during his week-long visit in town. Apocalyptic Planet was the common reading experience for the college freshmen (and the wider community). Often, he noted the goal of his writing was to bring readers out of their easy chairs and into the wilds, out on the trails where most cannot follow. To that end, he leaned heavily on figurative language. However, the text held so many of these descriptive gems, they eventually dulled into common minerals. I lost sight and sense of the place, or else lost the scope and stakes of the environmental issue under scrutiny. As a result, the pacing slackened and my desire to keep reading waned (the very thing my writing advisers and mentors always warned me about).

Perhaps if the earth generally benefits from gobbling up its most precious places, then Craig and I might also benefit from wiping away our more darling descriptions.