Summary: World War II historical fiction of the most gripping kind! Either the protagonist, Julie (AKA “Verity”) spills her guts about her spying exploits or her Gestapo torturers will…well, spill her guts for her!

Critique: This book is an epistolary thriller (thought you’d never see that combo, right?) assembled from hotel stationary scraps, prescription cards, and any other pulpy item around that can be scrounged up. The more the pieces assemble Verity’s confessions, the deeper readers dig into her friendship with female pilot, Maddie. Eventually, readers discover that Maddie flew the plane that crashed landed Verity right into enemy hands. And just when the narrative reveals Maddie’s fate since the crash, readers lose contact with Verity!

The motivations driving the characters are electrically urgent and starkly primal! The historical facts are cunningly deployed. The pace is a swift, cruel dive into constant unknowns and dangers. The pages might as well be coated in super glue — no way can you put this book down! 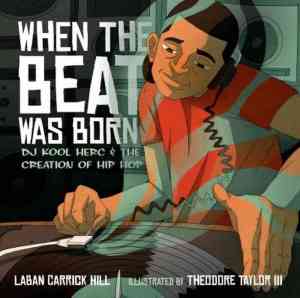 Summary: Clive Campbell falls in love with music and dance parties while growing up in Jamaica. He moves to New York where he eventually becomes a very famous DJ with a lot of dynamic ideas for music. His ability to get people dancing suppresses violence between gangs and unifies whole neighborhoods.

Critique: The artwork matches the feel of the book. Hard-edged, a bit geometric, and a bit whimsical. Thick colors, very vibrant. Hill uses a steady refrain as the unifying element of the story. Every couple of pages, the story pauses and reminds the reader how Clive loves to hear the music “hip hip hop, hippity hop.” The text clearly defines terms like the “breaks” in a song, mixing beats into those breaks, as well as why b-boys are called b-boys and more. Back matter includes a fun timeline, bibliography of books, films, and web sources, and an author’s note about how he uncovered the story. 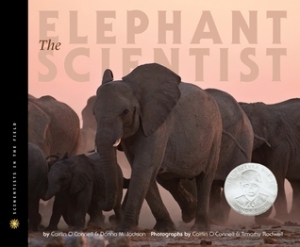 Summary: This is a true story. Caitlin grows up with a love for science. She studies bugs, but then gets a chance to study elephants in Africa. One day, no joke, her supreme knowledge of bugs leads to several breakthrough discoveries on how elephants communicate. Like: elephants may “talk” through their feet! She applies her knowledge to save elephants!

Critique: 2012 Sibert Honor Book. The beginning feels a little slow. Readers are introduced to Caitlin and her studies, but are not given an emotional reason to invest in this woman or her story. But then she gets to Africa and everything shifts. Caitlin must find a way to keep elephants out of the farmers’ crops without injuring anyone–elephant or farmer. And that’s the moment where the story really sparks! Caitlin’s dilemma is pressing and difficult to solve. From this point on, the book rollicks alongside cleverly embedded information on elephants, animal communication, and conservation efforts.

Summary: Hennessy and McConnell use the innovative and fast-moving format of the graphic novel mode to tell the story behind the Gettysburg Address, what prompted it, what it changed, and why it mattered to America and the world.

Critique: The cover of this book claims to retell this moment of history through Lincoln’s words. I was immediately drawn in because Lincoln is one of the most eloquent writers e.v.e.r. I assumed from that cover claim that the graphic novel would rely only on Lincoln’s writings. It turns out that is not the case, but the book hardly suffers as a result. Hennessy’s script is excellently composed and draws on a ton of primary sources. The writing is clear, even when dealing with ideologically or philosophically tough stuff. And combined with McConnell’s excellent artwork, each page is densely loaded. But the arc is compelling, engaging, and hard to put down.

The book opens like a movie with a series of live action scenes: a family returns to the war carnage on the front lawn of their home. Cut to: President Lincoln receiving word of the outcome of battle at Gettysburg. Then the narrative steps back and an omniscient narrator takes over. Acting like the voice-over in a film, this narrator begins to explain what is going on. The imagery takes on more of a mix-and-match composition. Sometimes a page might have as many as 9 panels, and each one is treated like an individual block of information, rather than one piece in a sequence of actions (which is what you usually get in graphic novels). Often the panels are briefly footnoted, informing the reader who or what is being depicted. Senator So-and-So from Tennessee 1865 or Governor Whatshisname from Maine 1848 or the Such-and-Such building.

But overall, the artwork works hard to embody the principles under discussion in the text. For instance, as the text presents the two founding ideologies of the nature of government in America, the artwork depicts the busts of the two historical figures alive and debating their sides from atop their marble, museum columns. At other times, the imagery is a little tougher to follow. For example, when the text shares a quote from a then-famous newspaper, the picture gives readers a drawing of the newspaper building or printing house with a word bubble popping out of a window to contain the quote. Or to represent the idea of sovereignty, the artist has Lincoln holding a shiny white ball with a modern power on/off button (such as the one you see on your computer). At first glance, it seems as if Lincoln is holding the precursor to Apple’s iPod. (Judging by the look on his face, he clearly wishes it were less literally “appled” and more pocket-friendly.)

Structurally, the book takes what I call the rabbit hole approach. It establishes the “present” moment: the political climate, the historical context, what happened at Gettysburg and why Lincoln needed to make a speech there. Then, it dips down the rabbit hole of time and moves backwards, to that “four score and seven years ago” when the Founding Fathers were first conceptualizing a new form of democratic governance. Then it dips further down, or shifts further back, and back again, and back again, going all the way back to the conditions of North American continent post-dinosaurs. Then it walks the reader forwards again getting all the way to the Civil Rights movement of the 1960s. Hugely effective, efficient, and easy to follow. Given all the recent conflict between communities and policing authorities, this book made for a sobering, yet illuminating read for the mature and leveled way it navigated issues like abuses of power, authority over the masses, and more!

Whether you have kids tapping into this era of American history, or you’d like a refresher, this book is well worth nabbing off the shelf! (And if you read it now, you’ll be able to look super-knowledgeable in all your patriotic 4th of July conversations coming up!)

Summary: When two young, royal people meet, fall in love, and marry, what else but a Happily Ever After could possibly await them? Well, in the case of Nikolai and Alexandra Romanov, its anything but. How about watching the country they rule slide into an agonizing civil war that eventually results in the brutal murder of their entire family?

Critique: There are many reasons why Flemin has received the Boston Globe-Horn Book Award and a Golden Kite Award for her nonfiction (with a Sibert honor and YALSA finalist recognition for this book to boot). But the best reason is that she writes ripping page turners, by which I mean you darn near rip the pages out of the book to see what happens next! In this example, Fleming establishes a teasing structure whereby she introduces the Romanovs at the height of their glory, wealth, and power, all while deftly hinting at debilitating secrets and an inevitable tragic demise. Sprinkled throughout the narrative are “peasant interludes” taken directly from diaries or newspaper accounts. Unlike commercial breaks interrupting your favorite crime drama, these passages contribute an outsider’s perspective, further illuminating what the rest of the world saw as the dark side of Romanov rule. Scope under the skin of her words and you’ll find a very standard syntactical anatomy. Where some writers give you pagefuls of damask, Fleming gives you denim: succinct, functional, with an as-a-matter-of-fact style. No, denim is not as fancy or flashy as damask, but it is durable. Good thing, considering all the burn marks your fingers will leave on the pages as you race along the downward spiraling vortex of tragedy marking the last third of this Happily Neverafter Tale.