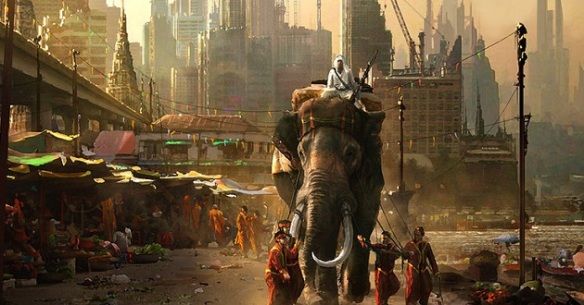 Summary: A genetically modified girl inadvertently kicks off a political shit storm in her struggle to escape the brothel imprisoning her.

Critique: Bacigalupi, a fellow Coloradan, has won the Hugo, the Nebula, even the Printz awards for his excellent writing! In this book, he deploys a future world that feels inevitable and inescapable! He paints a staggeringly accurate picture of what lies ahead if our current global conglomerates cannot (or will not) curb their energy dependence and waste! In the world of The Windup Girl, petroleum is a thing of the faded past. It’s been tapped. Nuclear energy is also out of the question, given the depletion of the materials needed to feed it. As a result, machines run off of kink-springs, tightly wound devices that tick off spasms of energy. Smaller devices, like a computer, run off whatever energy you can kick up while drumming your feet on a treadle! Flight is a luxury made possible with dirigible airships. And for really big machines to run, you basically have to hook them up to megadonts (a genetically spliced super animal made from elephants and mammoths).

But that’s only just the tip of Bacigalupi’s worldbuilding iceburg! Food systems have been completely destroyed by the mega-mono-cropping Monsanto types and their genetically modified comestibles. Mass plagues super-pests, and destructive vermin infect and destroy. Gene rippers and genehackers, brilliant scientists, have to resurrect extinct plants from patchy fossil records. Nonetheless, micro-bugs with sweet, evocative names like “blister rust,” “cibiscosis,” and “genehack weevil” hide themselves inside the university-lab-made foods sold on the market, and government corruption makes any and all disease-free certifications useless!

Life in all forms hangs on a tatty thread.

Needless to say, the worldbuilding in this novel is stunning, toothsome, captivating! Never will you find yourself so eager to turn the page and learn more about the freakshow that is future ecology! Never will you be so riveted by the sustainability innovations keeping a civilization teeter-tick-tocking along the precipice of collapse.

If only the ensemble cast of characters populating the novel were equally gripping and compelling. Don’t get me wrong, they are believable, complex human beings (one of them is a g-mod super-human sort) and they all have deep-seated desires driving their choices from bad to worse. But, the author takes a long time to reveal their true motives, which leaves the reader wondering for far too long: why is everyone so hectic and desperate? Also, relative to the problems maligning this disastrously delicate and all-too-believable world, the character’s problems seem a bit…well, piddly.

Perhaps it is also possible that Bacigalupi spent too much time on the less compelling male figures: AgroGen business mogul Anderson Lake, his weasling double-dealing secretary Hock Seng, or the true blue officer of the Environment Ministry, Jaidee, a former god in the Muay Thai ring. These men definitely have complex motives, genuine emotions, and conflicted ethics. But their stories are nowhere near as engaging as the women: Emiko, a New Person grown in a lab and designed to move in stutter stops so that she will always be a second class citizen, and Kanya, Jaidee’s second-in-command, who double-crosses her boss and must redeem her sins if she is to keep the whole world falling to hell in a hand basket! Emiko breaks our hearts again and again, while Kanya drives much of the action in the last third of the option, and yet both ladies get little comparative page time.

Nonetheless, The Windup Girl is still well worth your reading time! If nothing else, you can let your inner eco-geek run as wild as a megadont!